For decades, rupture disks have been used in petrochemical, aerospace, defense, medical, railroad, nuclear, chemical, pharmaceutical, food processing and oil field applications. In these applications, rupture disk sizes ranged from 1” to 6”, with larger sizes up to 60” for the largest piping configurations. To install the product, the rupture disc is placed in a holding device, called a safety head, and installed between flanged pipe ends.

However, as equipment manufacturers strive to make their products smaller and lighter, the rupture disk industry has been challenged to deliver miniaturized options well under 1” in diameter.

Due to a delicate balancing act between the shrinking diameters, a complicated choice between two rupture disk design philosophies, the limitations of the specific raw materials utilized for the membrane, and the variations required to meet the requirements for low, mid and high burst pressures have forced rupture disk manufacturers to the drawing board.

The first major decision when selecting any rupture disk of any size is the choice between forward-acting and reverse buckling technologies.

In the traditional forward-acting design, the loads are applied to the concave side of the disk.  The thickness of the raw material employed and the diameter of the fitting in which it is mounted determine performance.

However, with this approach the rupture disk is prone to metal fatigue caused by aggressive cycling and operating conditions that can limit its operational life. Traditional rupture disk technology is additionally limited to applications having an operating to burst pressure ratio of 75% or less to avoid fatigue effects leading to potential unwanted activation.

Exacerbating the issue, forward-acting miniaturized disks with low set pressures require the use of tissue paper thin raw material that is fragile and prone to leakage when assembled.

In a reverse buckling design, on the other hand, the dome is inverted toward the source of the load. Burst pressure is accurately controlled by a combination of material properties and the shape of the domed structure.

By loading the reverse buckling disk in compression it is able to resist operating pressures up to 100% of minimum burst pressure even under pressure cycling or pulsating conditions. The result is greater longevity, accuracy and reliability over time.

BS&B Safety Systems invented the first rupture disk device in 1931. The company later pioneered reverse buckling technology and, more recently, the application of that approach to miniaturized disks as small as 1/8” at all ranges of pressure.

“As burst diameters decrease it becomes increasingly difficult to design a reverse buckling dome that will reliably collapse through such small orifice sizes,” says Brazier. “In many ways it can be like trying to fit a camel through the eye of a needle.”

To resolve this issue, BS&B has created novel structures that control the reversal of the rupture disk to always collapse in a predictable manner.

This includes, for example, a hybrid shape that combines reverse buckling and forward bulging characteristics that are pre-collapsed. In this type of design, a line of weakness is typically placed into the rupture disk structure to define a specific opening flow area when the reverse type disk activates. 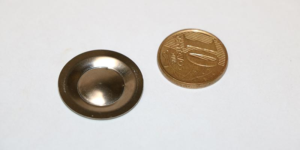 Small nominal size rupture disks can also be very sensitive to the detailed characteristics of the orifice through which they burst, causing normal variations in holder support machined part dimensions to have an unwanted impact on burst pressure accuracy.

“With small size pressure relief devices, the influence of every feature of both the rupture disk and its holder is amplified,” explains Brazier.

For miniaturized products ¼” and up certified for high burst pressures up to 70,000 psi, BS&B manufactures the rupture disk and holder from a single piece of material, eliminating the usual connection between a rupture disk membrane and its support fitting. The rupture disk is intrinsically leak-tight by virtue of its unitary construction.

As for installation, Brazier says these miniature rupture disks are available as a single, integrated assembly certified to perform at the desired set pressure. The devices are typically threaded, but are also available in configurations for welding, soldering, or crimping based on the application conditions and leak tightness requirements.